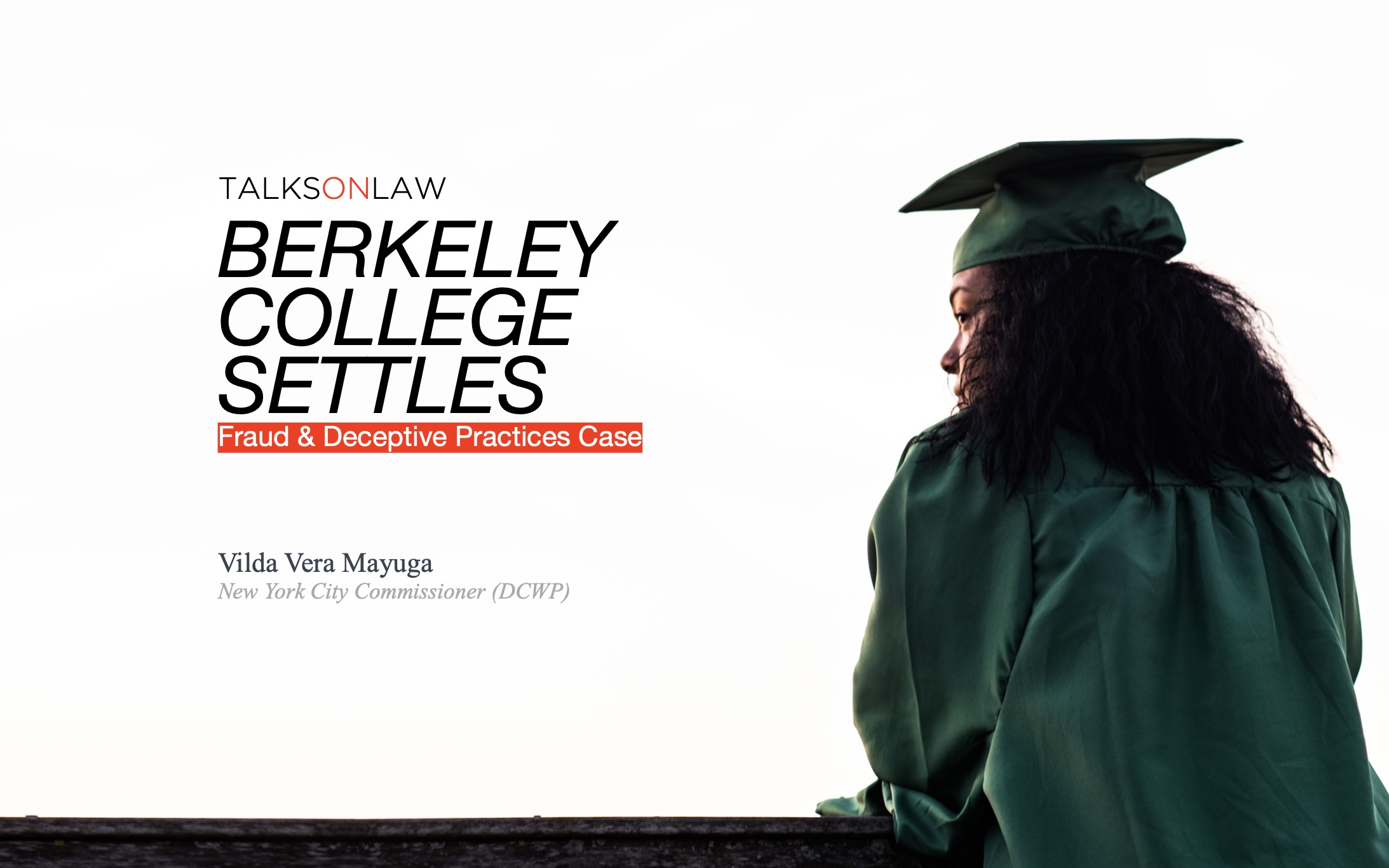 In March 2022, the New York City Department of Consumer and Worker Protection (DCWP) reached a settlement with Berkeley College for $20 million in debt relief to former students. Berkeley College is one of the largest for-profit colleges in New York state and has campuses in New York and New Jersey. The settlement resolves a 2018 lawsuit filed by the DCWP in which the city alleged that Berkeley engaged in a variety of deceptive and predatory practices.

What were the alleged deceptive and fraudulent practices, and what are the benefits of the settlement for students? DCWP Commissioner Vilda Vera Mayuga explains in an interview with TalksOnLaw.

The Allegations in the Lawsuit

In the lawsuit filed in 2018, the DCWP alleged that Berkeley violated the NYC Consumer Protection Law and local debt collection rules in its practices. Prior to filing the lawsuit, the DCWP conducted a nearly two-year investigation, which included undercover operations and interviews with current, prospective, and former students. The DCWP determined that Berkeley College engaged in “deceptive and predatory practices” in its dealings with students.

The lawsuit alleged, among other things, that Berkeley College misled students about their financial aid options, for example, misleading students to take out loans when they didn't need loans because they qualified for government grants. According to the DCWP, Berkeley College also steered students toward taking loans directly from Berkeley by requiring them to enroll in “payment plans,” which were actually loans, to pay their tuition. “A lot of these individuals are also first generation to obtain an advanced degree or go to college, and, unfortunately, they fell victims of this bait-and-switch,” said Commissioner Mayuga.

The settlement, entered into on January 11, 2022, requires Berkeley to provide relief to affected students and institute new policies. As part of the settlement, Berkeley is required to cease debt collection of any outstanding student debt incurred before January 1, 2019, which it estimates to be valued at $20 million. Further, Berkeley is required to pay $350,000 to the city, which will be managed by the DCWP to pay restitution to students who filed complaints.

Berkeley must also institute policies related to: 1) admissions interviews and financial aid counseling for incoming and currently enrolled students, 2) communications with students about transfer credits and financial aid, 3) communications with students about debts owed, and 4) making sure statutes of limitation on debt collection are observed. The DCWP will be auditing a random sample of admissions interviews to ensure that Berkeley is abiding by the policies.

While the settlement provides $20 million in debt relief, $350,000 in damages, and a number of other requirements as outlined above, the agreement does not require any admission of guilt on the part of the college. As a result, the alleged actions remain allegations, and the college denys wrongdoing.

Commissioner Mayuga urged students who believe they may be affected or have any questions about the settlement to reach out to the DCWP. The DCWP can answer questions about potential relief and direct students to other resources. The DCWP also runs Financial Empowerment Centers to provide one-on-one counseling to New Yorkers and help them explore options to manage student debt or otherwise improve their financial health.