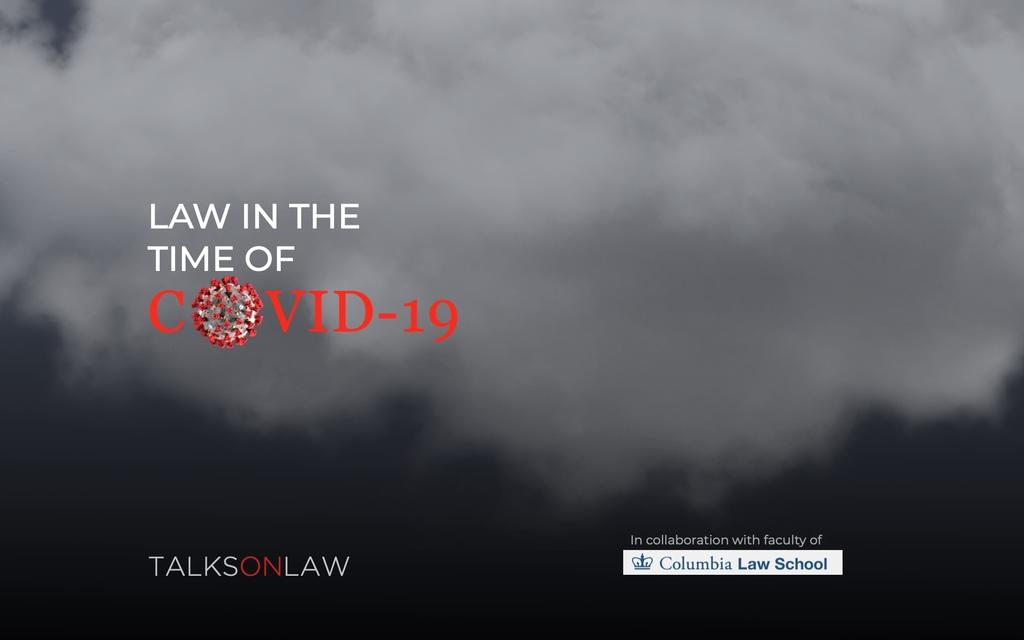 “ We have organized our lives so much in legal commitments that we’ve made to one another.… When a crisis like the pandemic comes along, all of a sudden, that system is thrown up in the air, and we’re all trying to reconfigure where we stand. ”

Katharina Pistor is an Edwin B. Parker Professor of Comparative Law at Columbia Law School. She is an expert in corporate, business, and transactional law, as well as tnternational and comparative law. Her scholarship focuses primarily on corporate governance, money and finance, property rights, and comparative law and legal institutions. Prior to joining Columbia Law School in 2001, she held teaching and research positions at Harvard Law School, the Harvard University Kennedy School of Government and the Max Planck Institute for Foreign and International Law in Hamburg. She has also been a visiting professor at Frankfurt University, New York University Law School, the University of Pennsylvania Law School, Oxford University, and the London School of Economics. She is a research associate with the Centre for Economic Policy Research. In addition to having been an investigator of the Global Finance and Law Initiative from 2011-2013, she was also a member of its board of board of directors from 2011-2014 and of the Berlin-Brandenburg Academy of Sciences. She has written or co-written nine books, most recently, The Code of Capital: How the Law Creates Wealth and Inequality, which was published in 2019 and named one of the year’s best books by the Financial Times and Business Insider. She is a prolific writer of articles that have been published in several legal and social science journals. Her most recent essay, “From Territorial to Monetary Sovereignty,” was published by the Journal on Theoretical Inquiries in Law in 2017. She has also served on the editorial boards of several reputable publications, including the Journal of Institutional Economics and the European Business Organization Law Review.

Professor Richard Briffault is the Joseph P. Chamberlain Professor of Legislation at Columbia Law School.  He joined the Columbia Law faculty in 1983.  He was law clerk to the Honorable Shirley M. Hufstedler of the United States Court of Appeals for the Ninth Circuit, and was Assistant Counsel to New York Governor Hugh L. Carey. In 2014, Briffault was appointed Chair of the Conflicts of Interest Board of the City of New York. He was a member of New York State’s Moreland Act Commission to Investigate Public Corruption (2013-14), and served as a member of or consultant to several New York City and State commissions dealing with state and local governance including the New York State Commission on Local Government Efficiency & Competitiveness (2007-08), the Temporary New York Commission on Constitutional Revision (1993-95), the New York City Real Property Tax Reform Commission (1993), and the New York City Charter Revision Commission (1987-89). He is currently the Reporter for the American Law Institute's project on Principles of Government Ethics. He is also vice-chair of Citizens Union of the City of New York. His research, writing and teaching focus on state and local government law, legislation, the law of the political process, government ethics and property.  He is co-author of the textbook State and Local Government Law (7th ed. 2009); principal author of Dollars and Democracy: A Blueprint for Campaign Finance Reform (the Report of the Commission on Campaign Finance Reform of The Association of the Bar of the City of New York 2000); and author of Balancing Acts: The Reality Behind State Balanced Budget Requirements (20th Century Fund Press 1996) as well as more than seventy law review articles.

Ed Morrison is the Charles Evans Gerber Professor of Law at Columbia Law School. He specializes in corporate, business, and transactional Law. He is the faculty director of the Law School’s Executive LL.M. Program and co-director of Columbia University’s Richard Paul Richman Center for Business, Law, and Public Policy. In 2018, he received the Willis L.M. Reese Prize for Excellence in Teaching. His scholarship focuses on corporate reorganization, consumer bankruptcy, the regulation of systemic market risk, and foreclosure and mortgage modification. In his recent work, he studies patterns in racial disparities in Chapter 13 bankruptcy filings, inter-creditor agreements, valuation disputes in corporate bankruptcies, and the relationship between financial distress and mortality rates. Prior to joining the Columbia Law School faculty, Morrison taught Commercial Law at the University of Chicago and clerked for Justice Antonin Scalia of the Supreme Court and for Judge Richard A. Posner of the 7th U.S. Circuit Court of Appeals. He is a prolific author and speaker, and his work has been widely published in leading peer-review publications, including the American Economic Review and the Journal of Law & Economics, among others. His article “Dodd-Frank for Bankruptcy Lawyers,” co-written with Douglas Baird and published by the ABI Law Review, received the 2012 John Wesley Steen Law Review Writing Prize from the American Bankruptcy Institute. The bankruptcy bench and bar has cited his work and he has garnered support from the National Science Foundation and Pew Charitable Trusts. Morrison is also the co-editor of the Journal of Legal Studies and a member of the National Bankruptcy Conference, and formerly served as a director of the American Law & Economics Association, associate editor of the American & Economics Review, and member of the Supreme Court’s Advisory Committee on Bankruptcy Rules.

Jane Spinak is an Edward Ross Aranow Clinical Professor of Law at Columbia Law School, where she was the founding board chair of the Center for Family Representation. She specializes in juvenile justice, child advocacy, and family court reform. She is the co-founder of Columbia Law’s family and children’s clinics and currently directs the Adolescent Representation Clinic. She also served as Columbia Law School’s director of clinical education from 2001 to 2006. She is a member of the New York State Permanent Judicial Commission on Justice for Children and serves on the Mayor’s Advisory Committee on the Judiciary and an adviser on the ALI’s Restatement of the Law, Children and the Law. She co-chaired the Task Force on Family Court in New York City from 2008 to 2011. Before teaching at Columbia, she worked as a staff attorney at the Juvenile Rights Division of the Legal Aid Society of New York City and served as attorney-in-charge of the Division from 1995 to 1998. In addition to serving on several committees and task forces addressing the rights and needs of families and children, she has also prolifically written for an spoken to child advocates, lawyers, and judges in public service. Currently, her scholarship focuses on the history and effectiveness of the Family Court. Her most recent article, “They Persist: Parent and Youth Voice in the Age of Trump,” was published by the Family Court Review in 2018 and in the same year, her chapter “Busting the Juvenile Super-Predator Myth,” which she co-wrote with Laura Cohen, was published in Rights, Race, and Reform: 50 Years of Child Advocacy in the Juvenile Justice System by Routledge. She was also awarded the Kathryn A. McDonald Award for Excellence in Service to Family Court in 2018.

Olatunde Johnson is the Jerome B. Sherman Professor of Law and the Co-Director of the Center for Constitutional Governance at Columbia Law School. She specializes in antidiscrimination and equality Law, fair housing, employment discrimination law, statutory interpretation, and civil procedure. Prior to teaching at Columbia, she was a clerk for Judge David Tatel on the U.S. Circuit of Appeals for the District of Columbia and Justice John Paul Stevens on the U.S. Supreme Court, as well as the constitutional and civil rights counsel to Senator Edward M. Kennedy on the Senate Judiciary Committee and a senior consultant on racial justice in the ACLU’s National Legal Department. She also worked at the NAACP Legal Defense Fund, where she conducted trial- and appellate-level litigation. She has written several articles and chapters on modern civil rights legislation, congressional power, and innovations to address discrimination and inequality. She has been been published in the Stanford Law Review, the New York University Law Review, the Journal of Constitutional Law- Penn Law, and more. In 2019, her chapter “Choice and Gentrification” was included in the book The Dream Revisited: Contemporary Debates About Housing, Segregation, and Opportunity, published by the Columbia University Press in 2019. She was awarded Columbia Law School’s Willis L.M. Reese Prize for Excellence in Teaching and Columbia University’s Presidential Award for Outstanding Teaching in 2016, as well as the Public Interest Professor of the Year in 2009.

Alexis Hoag is a lecturer and an Associate Research Scholar in the Faculty of Law at Columbia Law School. She is the Practitioner-in-Residence at the Eric H. Holder Jr. Initiative for Civil and Political Rights. She is a civil rights and criminal defense lawyer with over a decade of experience, representing capitally convicted clients in federal post-conviction proceedings among others. Hoag has represented clients in a variety of criminal and civil matters at the NAACP Legal Defense and Educational Fund, Inc. (LDF) as Senior Counsel, notably Davis, et al. v. City of New York and New York City Housing Authority. Prior to LDF and joining the Columbia Law faculty, she was a writing and research attorney and Assistant Federal Public Defender in the Office of the Federal Public Defender for the Middle District of Tennessee, and clerked for The Honorable John T. Nixon of the United State District Court for the Middle District of Tennessee. Her scholarship focuses on capital punishment, civil rights, and race and criminal justice. She serves on the editorial board of the Amicus Journal and on the capital punishment committee of the New York City Bar Association. She has authored amicus curie briefs on behalf of capitally convicted individuals challenging their sentences due to racial discrimination before the U.S. Supreme Court and state supreme courts. Hoag regularly conducts death penalty trainings on racial discrimination in jury selection and cultural competency in the defense team.

Vulnerable Populations in a Pandemic

In the COVID crisis, the most impacted groups include the most vulnerable segments of our population. In this 3-part interveiw, Alexis Hoag first explains how prisoners are affected by the pandemic and how recent precedence informs their ability to assert their legal rights to access healthcare and safe conditions. Professor Olatunde Johnson then explores what some states have done to ensure access to essential services like utilities and broadband and delves into the pandemic's impact on contract and gig workers. Lastly, Professor Jane Spinak describes how family courts have been responding to the crisis and the important role lawyers play as advocates for children and families.

Law in the Time of COVID-19

In response to the COVID-19 pandemic and its social, political, and economic effects, members of the Columbia Law School faculty came together in March 2020 to publish an ebook to help identify the key legal issues and provide guidance to policy makers. Spearheaded by Professor Katharina Pistor, leading Columbia Law professors explore COVID’s impact on all facets of our lives, including contracts, elections, bankruptcy, child welfare, the gig economy, and prisoners’ rights.

Professor Katharina Pistor explains the wide-reaching effects the pandemic has and some of the critical legal issues explored in the ebook. In the latter half, Professor Richard Briffault describes how elections unfolded across the country early on in the pandemic as states scrambled to hold primaries, with particular focus on Ohio and Wisconsin. He explores what went right, what went wrong, and what changes should be implemented leading up to the November 2020 presidential election to ensure a fair and safe electoral process.